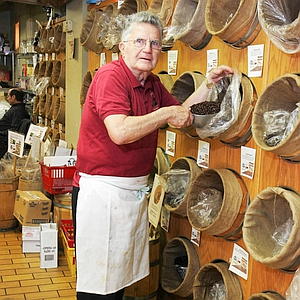 Frank D’Amico was just two weeks shy of his 96th birthday and died peacefully while surrounded by his loving family and friends.

Frank had previously lived in Bensonhurst, Brooklyn, where he and his wife, Maureen T. (née McGraw), who predeceased him on February 9, 1990 in Brooklyn, raised their three children,  Dianna, Barbara, and Francis, Jr.

Frank was smitten by his grandson, Petros, from the start, and, as Frank would often say, he felt  blessed for his own longevity insofar as it gave him the chance to help raise his grandson.

In addition to his three children and grandson, Frank also leaves behind his sister and best friend,  Prudenza (Nancy) Ceppos. The strongly-bonded pair, who for many years spoke nearly daily on the  telephone.  Frank also leaves behind his daughter-in-law, Joan  (Joanny), Dianna’s significant other, Freddie, and several nieces, nephews, cousins, and many friends and “adopted” family members, as Frank would sometimes call them.  Also important in his life was his younger Marianna (Anna) Viola who passed on just one short year ago .

Frank was a noted community advocate, volunteer, and philanthropist. One of the many organizations that received his time is the Kiwanis Club of West End, of which he was a member  for decades. For three-quarters of a century, Frank D’Amico, Sr. was a fixture on Court Street  and in the surrounding neighborhood in which he grew up and in which he ran his business. His  contributions to Court Street and the neighborhood are innumerable.

As Frank told it, his father, Emanuele, began the family business, D’Amico Foods, originally as  a grocery store. D’Amico Foods would later transition to D’Amico Coffee. After transitioning  the business to D’Amico Coffee, Frank further expanded it by creating a mail-order service. Frank would pass on the business  to Francis and Joanny, who continue to operate the Court Street location, now seventy-five years after its initial founding. Frank never relinquished his shared  mayoralty of Court Street, and the large storefront awning adorned with his family name will continue the memory of his presence.

Born on January 27, 1927 to Italian immigrant parents living on Union Street in Brooklyn. At 17-years-old, he joined the Navy and served the United States in World War II, which was one of his proudest achievements.  Eventually, Frank came home to Brooklyn to run the family business for the next  half-century.

Frank gave considerably to charity, be it in the form of time, talent, treasure, or some other aid,  all of which he expended with great devotion. A successful businessman, Frank’s character was  not perturbed by material wealth. He lived austerely, seeing any material wealth that he did have  as being not for his own advantage but for the benefit of his children, grandson, and sisters, as  well as providing opportunity for him to give to the less fortunate.

In lieu of flowers, the family requests donations in Frank’s name to “Kamp Kiwanis,” a sleep away camp serving economically disadvantaged children ages 8-17 and adults with special  needs, which is a charity, located in upstate, New York, that Frank supported for many years. More information may be found on the Internet, at www.kampkiwanis.org, or retrieved by  telephone, at (315) 336-4568. Be sure to include “in memory of Frank D’Amico, Sr.”