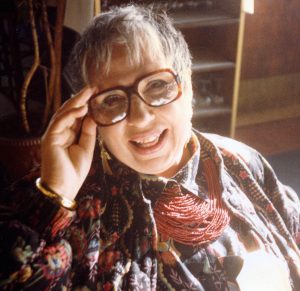 Toni Parmet was born in 1923, a middle child struggling to be heard in a large, loud  Italian family in East Boston. Her parents were both born in Italy and met in a hardscrabble coal mining community outside of Pittsburgh. They escaped by getting married; her mother was 13 and her father barely 17.  Once their seven children had arrived, there were four girls sharing one bed, three boys sharing another, and all nine hungry souls sharing one quarter pound of butter a week during the depression. Surprisingly, when she was just 8 years old, she was so quiet and shy that her mother delighted in predicting that she would be a nun.
But that early reticence did not prove to be a predictor of future behavior. Toni was smart, she was fearless, and she never took “No” as the final answer. When prohibited from visiting the Boston Museum of Fine Arts because of the presence of so many naked men, she persevered until her father relented and agreed to accompany her himself. At a time when the highest ambition allowed an Italian woman was to marry and have many children, Toni won a scholarship to BU and continued there until she became the youngest woman to earn a Masters Degree in Social Work there. She was just 22.
And Toni continued to use her smarts, her savvy, and her fearlessness to fight for the helpless, the friendless, and the neediest among us. She began her career right after school with the Red Cross, providing therapeutic comfort and care for shell-shocked soldiers committed to a Rhode Island psychiatric hospital.  From helping broken soldiers she turned her passionate commitment to helping children and adolescents, acting as a psychiatric social worker in Brooklyn, first as caseworker and later as Chief Social Worker in the Brooklyn Neuropsychiatric Clinic. It was at that time, at a mixer hosted by some of her co-workers, that she met Solomon Parmet, who became the love of her life–a starving musician in a zoot suit who had crashed the party for the free booze and plentiful food. Once again, the fact that she was already engaged to be married to a psychiatrist did not deter her from pursuing  her chosen course!
Soon they married and moved to Rochester, New York. But the suburbs could not contain Toni’s restless spirit and she moved them back to Brooklyn to the very apartment house where she lived for the next 63 years, and where she passed away last November 20 in her bed, listening to the voice of her beloved granddaughter Lianna, a little late for her date with Sol who had passed one year before.
With her exit she continued her life-long ability to live life on her own terms. She was among the first women to head the Adolescent Clinic at New York Hospital where she spent 11 years as a supervisor inspiring a generation of school social workers, a job she followed with a dozen years as Training Supervisor for a staff of over 200 professionals.   In 1986 she was named Supervisor of the Year by the New York City Board of Education. And, in one of her proudest pioneering  moments, she was first woman to be named President of the Parents’ Association of the barely coeducational Stuyvesant High School.
And yet, she was a woman of such energy that she managed her role as a working woman without missing a beat as both a devoted mother and a loving wife.  She supported and inspired Sol to play his bass as often as possible, singing along whenever she could. And she never completely abandoned her Italian heritage, presiding over hundreds of dinners where all were welcome to talk, laugh, and eat copious amounts of delicious food. At that table she also served as the bold and glamorous “Auntie Mame” to a host of nieces and other teens who flocked to her warmth, acceptance, and exciting conversation. Finally, she became the tireless “Nanna” who would patiently play endless games of dress-up and Princess make-believe with her two devoted granddaughters.
Antoinette is survived by her Sister, Rosemarie Marmo Tirrell, her daughter, Davina Parmet, and her two granddaughters, Lianna and Sasha Reagan. A celebration of her life is being planned  next June in Wellfleet, Massachusetts where she and Sol will be interred together. A small memorial for her New York family, friends, and caregivers will be held on Saturday, January 14, at 1:30 PM at the Scotto Funeral Home, 106 First Place, Brooklyn. All are welcome to remember Toni with a coffee, a cookie, and a story.
Donations in Toni’s memory can be sent to The First Unitarian Church, 48 Monroe Place, Brooklyn, NY 11201.