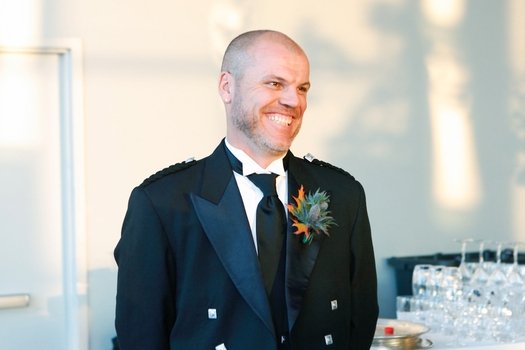 Services at Grace Episcopal Church, 254 Hicks St, Brooklyn, NY 11201 on Thursday, November 13th, 2014 from 4PM till 6PM.
Friends and Family of Mark are encouraged to wear Manchester United Jerseys, t-shirts or team colors.
A memorial fund has been established in Mark’s name, in lieu of flowers or gifts. The fund will be donated to an educational charity or organization in Brooklyn. To donate, you can visit https://www.youcaring.com/markmcleanmemorialfund
Mark McLean, husband, father, son, educator, has died at age 43.
While Mark was taken from this world far too soon, it is easy for those that knew him to recount the innumerable stories of his immense generosity towards others and the love for his family that burned bright within him. McLean, who lived and worked in Brooklyn, truly lived and lead by example, whether it was surprising the local teens with coveted Nets playoff tickets or helping a neighbor recover while in the hospital, Mark asked for nothing in return. As those that had the good fortune to call him friend can attest, his supersized sense of loyalty and devotion was but one small part of a man whose own father noted that “Mark was born to be a father”. The love and affection he felt for his children beamed from every fiber of his being.
When Mark met his wife, Carrie, he knew after just a few dates that she was “the one.” As their union rapidly grew, together they recognized a sameness of ideals and hopes for their future; a future filled with laughter, love, friendship, community and family. Through the years, the home that they built together, soon became a gathering place for friends and neighbors alike. It was a safe space that welcomed one with its warmth and openness.
Born in Scotland, Mark was a proud and rugged Scotsman who loved his steak and the sweet taste of victory on the playing field, but whose tenderness and emotional depth were easily visible to those who spent even a short while with him. And nowhere was this more evident than in the care in which he took in the raising of his and Carrie’s children. On any given day, Mark could be found kicking the soccer ball with his son, Colin, in the backyard or rollicking with his kids in the nearby park. He was a hands-on dad, and delighted in the daily activities of his children.
Professionally, it was no surprise that Mark devoted his time to public school children. His career in education began in earnest while in Los Angeles, before moving to San Francisco where he worked as a Special Education Teacher, Dean, and Literacy Director. When “Mr. M”, as the children lovingly referred to him, moved to Brooklyn, he cherished his time at Public School 503 in Sunset Park before expanding his impact in education as a Director in the NYC Department of Education’s Office of Teacher Recruitment and Quality. Wherever Mark worked, he made a lasting impact on those around him; often unselfishly taking time out of his day to be a support, be it for a student or a co-worker.
Mark passed away on Thursday, November 6, 2014. He is survived by his wife, Carrie Davis McLean; their two children, Colin and Kaia McLean; his parents, Moira and Colin McLean; his sister, Kerry McLean of Los Angeles; and his grandmothers, Charlotte McLean and Euphemia Docherty of Edinburgh, Scotland.
And yes, Mark, that outfit looks great on you (for he was the sharpest of dressers), and forever more, GO Manchester United!!!