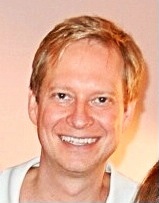 Menswear executive, died Thursday evening, December 26th, at his home in Seattle after battling Amyotrophic Lateral Sclerosis (ALS), also known as Lou Gehrig’s disease.  He was 46.
Palionis was born and raised in Chicago, Illinois and later graduated from the University of South Florida with a Bachelor of Arts degree in 1990.  His early retail career began in Chicago working in store management at the Wm. A. Lewis Clothing Company followed by Banana Republic.  In 1992 Palionis joined the home store buying offices at Burdines in Miami, Florida.  In 1995 he made the transition to wholesale by moving to New York City for a sales position with Hugo Boss.  He spent the next 16 years in various executive roles at Calvin Klein (G.F.T), Donna Karan, Op/Ocean Pacific (Warnaco), and most recently as a Senior VP at G-III Apparel Group.
Vyto was the youngest of three siblings and is survived by his partner, Bruno, brother Edmund, and his beloved Papillion, Lacey.
His funeral mass will be celebrated on Monday morning, December 30th at 10:45 am at Visitation Academy, 8902 Ridge Blvd, Brooklyn, NY 11209.
Internment will be at the Holy Trinity Parrish Cemetery on Ceder Street in East Hampton followed by a luncheon at Page Restaurant in Sag Harbor at 63 Main Street.
A bus has been reserved for those who wish to attend the burial and luncheon. The bus will return guests to Visitation Academy at approximately 8:15 pm. (Please RSVP to Bruno.grillo1@gmail.com if you would like to ride the bus so that we may be certain to provide adequate space)
At Vyto’s request donations may be made in lieu of flowers to one of the following causes close to his heart:
The Robert Packard Center for ALS Research at Johns Hopkins, Baltimore, MD  (in memory of Vyto Palionis) http:/alscenter.org/donate
Visitation Academy – Early Childhood Playground (memorial gift in honor of Vyto Palionis)
The American Society for the Prevention of Cruelty to Animals, dba SPCA (in memory of Vyto Palionis)

Vytas, If you’re listening now, I hope I make more sense. Now, I am not quite so young and not quite as foolish. It was only yesterday that we were young, having the time of our lives. Little did I know that we would have created a fine life together, complimenting one another as soul mates do. Your love shaped my life, our lives. Without you, here, by my side, I realize that there has been no regrets and mistakes. You were chosen to be the half that I now lost, physically. I could never lose the soul you instilled in me.

Your love, loyalty and honor will live on in me forever. I promise to carry on your legacy. I will love you forever! Bruno

What greater thing is there for two human souls

Than to feel that they are joined together to strengthen each other in all labor,

To minister to each other in all sorrow,

To be one with each other in the silent unspoken memories

To Be One With Each Other